Electrodermal Screening or EDS is the use of technologies to measure the body’s energy to find imbalances and potential problem areas.  It is also widely known as Bio-Energetic Stress Testing. This technique measures the flow of energy, or more specifically the resistance to the flow of electrons in a person through their skin.

This is done by testing acupuncture points on a person’s body with a small probe, electrode or stylus connected to a specialized computer or computerized machine.

These points are important when considering where the EDS is used and can be essential for the acupuncturist and patient in finding the best places on the body for treatment and where additional treatment may be needed.

When energy flows through these meridians, the body is considered to be in balance and healthy. It is the abnormalities or imperfections in this energy that Electrodermal Screening looks for. Traditionally, acupuncture or other herbal remedies would be administered afterward.

The History of Electrodermal Screening

RELATED:   The Epic, A Biomeridian Technology for Stress Testing

Actual usage of these discoveries wouldn’t be used until the turn of the century around 1906. One of the first documented uses of EDS was by C.G. Jung, and he wrote about it in his book “Studies in Word Association.”

In the 1950’s another German named Reinhold Voll started combining the use of Electrodermal screening and acupuncture. Voll, who was both a physician and acupuncturist, developed the first system. His EDS system was called the Dermatron and is the first generation of what would become the EAV or Electroacupuncture of Voll.

Though some of Voll’s methods and theories would be criticized he would dedicate the rest of his life to his assumptions about the correlations between diseases and the electrical resistance changes along the acupuncture points in the meridians.

RELATED:   Balancing The Body With A Meridian Stress Assessment

He thought that if he could identify electrical changes in specific acupuncture points associated with particular diseases, then he might be able to identify those wellness issues easier and earlier. 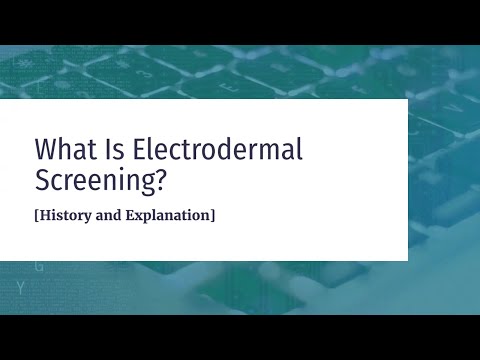 Doctors and health practitioners should know that the admiration of Electrodermal screenings and the usage of these types of screenings vary by state and are also enforced state by state.

Please check the rules and regulations in the state or country that you live in. Be sure to let your patients know that they need to be careful not to stop any medication or prescriptions prescribed by any of their doctors. EDS screening and subsequent acupuncture and holistic remedies shouldn’t replace prescriptions or regular checkups with primary care physicians.

Electrodermal Screening is used today for many different things such as nutrition, sports, and homeopathic remedies. If this is something you are interested in, get informed about it, talk to your colleagues. Don’t forget to check your state’s rules and regulations and decide if it is something you want to explore or incorporate into your practices or business. Both the BioScan MSA and BioScan SRT can perform electrodermal screening.  Please contact us to learn more on how BioScan can be integrated into your practice.