Energy vampires often take advantage of vulnerable people, such as the elderly or those with low self-esteem. They use this power to manipulate their victims into doing what they want, often taking advantage of their trust and confidence.

They often feed off of the positive energy that others bring to their lives. They can be very destructive and take advantage of sensitive people to get what they want, often draining their victims of all their energy and leaving them exhausted. It is essential to be aware of their presence and avoid being taken advantage of.

How They Steal Energy

Energy vampires are predators using unnatural powers to manipulate and control their victims. These individuals typically use charm, persuasion, insecurities, and fear to convince others they need or deserve their victim’s love and attention.

They often take advantage of people who are feeling vulnerable or insecure, seeking out those who have less power in life. Victims can find themselves trapped in a cycle of dependency on toxic people to who they provide emotional support, comfort, and money in exchange for the vampire’s continued support.

There is no definitive way to identify an energy vampire, but they often display signs of being manipulative, controlling, and emotionally abusive. They may isolate their victims from friends and family or use threats or intimidation to keep them in line. 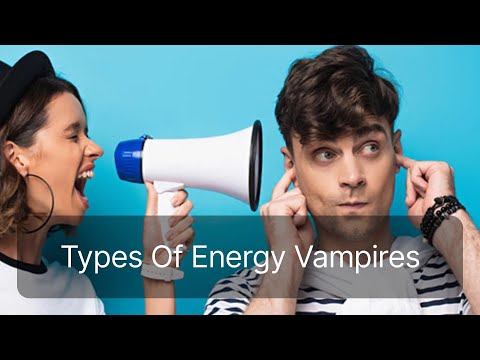 Energy vampires use criticizing to steal energy from others. When someone is critical, they are taking away energy that the critic may need for themselves. It can be done in several ways: by creating an argument, making assumptions, or simply being negative. Criticism can be a valuable tool in life but should always be considered before being spoken aloud.

They will often take advantage of vulnerable people who need support. Energy vampires can be anyone, but they tend to be people who are not taking care of themselves. They may have a problematic relationship with their energy or may have lost touch with their power. These individuals often use criticism as a way to take away the energy of others and feel powerful in the process.

Energy vampires use their control and manipulative tendencies to steal energy from their victims, often without even realizing it. It can be done in several ways, such as talking over someone or monopolizing the conversation. They also tend to be very good at making people feel small and insignificant, which makes them easier prey for taking away their energy.

This type of energy vampire is hazardous to be around, as they can often take away a lot of energy without anyone realizing it. t can lead to people feeling tired, drained, and depressed, which makes them easy targets for other types of predators.

Emotional vampires use drama to steal energy from others. They use emotional tactics, such as accusing their targets of being unfair or unsupportive, of getting them to withdraw their energy. Energy vampires may also try to guilt their targets into giving them what they want by insisting they are causing themselves pain or harm.

They are parasitic entities that need to feed on other people to survive. By using kindness, drama, and emotional manipulation, they can take away the energy of their targets without anyone realizing it. It can lead to genuine harm or even physical illness for those drawn into the vampire’s web.

They use their entitlement to steal energy, often without meaning or knowing that they’re doing it. It can be anyone from a family member to a co-worker, and everyone around them can feel the impact of their behavior. When someone is an energy vampire, they tend to take more than they give back. They may come across as entitled or selfish and may not realize how much energy they take from others until it’s too late.

Energy vampires can be a significant drain on the resources of those around them, and their behavior can often have negative consequences. They take away energy from others, and their actions may lead to conflicts or arguments. In some cases, an energy vampire’s habits may even result in damage to property or loss of money.

Energy vampires are people who use their energy to steal the energy of others. They can do this by sitting near someone and taking away their energy. It can be a problem because their unwanted energy exchange takes away the energy that could be used to do things like work or stay healthy. They can also lead to people becoming tired and having trouble concentrating.

Energy vampires use their egos and self-worth to steal energy from others. They are often people already in a position of power or with a lot of money. They use their charm or persuasion to get people to give them energy and validation, often without knowing it, and can be very subtle in their approach, and many people don’t even know they’re being taken advantage of until it’s too late.

Judgment is a powerful tool energy vampires use to steal energy from an unsuspecting individual relying on their intuition and judgment to determine whether or not someone is an easy target. Then they take advantage of that person by draining their energy level without realizing it.

This type of behavior can be incredibly harmful because it steals away vital resources from people who are simply trying to live everyday lives. It can also have long-term consequences if left unchecked.

An inflated sense of self-importance characterizes narcissism, a need for admiration, and a lack of empathy for others. People with narcissism are often able to exploit others because they view them as objects that can be used to fulfill their own needs rather than people with whom they have relationships.

People who are energy vampires use narcissism to steal energy from other people. They take advantage of the fact that people with narcissistic tendencies tend to be highly attracted to sources of energy (such as positive attention.

Energy vampires are people who use nonstop talking to drain the energy of others. They may do this in a group or individually, but the result is the same – someone’s energy is drained. It can be done by taking over a conversation, monopolizing an event, or being chatty and insistent. They don’t need to speak loudly; they need to keep their victims engaged in conversation, so their energy doesn’t have time to recharge.

If you feel drained after interacting with someone, taking a step back is crucial and assessing the situation. If you notice someone constantly taking over conversations or events, it might be a good idea to politely say “no” and focus on your own needs.

Some will use passive aggression to steal energy from others. They often remain calm and friendly while draining the life force of their victims without ever saying a word. It allows them to stay unnoticed until it is too late, leaving the victim weak and exhausted.

Sometimes they will take more than they are supposed to, while other times, trying to convince the victim that they do not need any extra energy. They may even go so far as to accuse the victim of being selfish or self-centered if they refuse to give in.

They can use pessimism and fear to steal energy from others, making them feel like they need to conserve their resources. Energy vampires often use words like “limited,” “boring,” and “unfulfilling” to try and convince people that life is not worth living. The negativity drains the vitality of those around them, leaving them tired, drained, and anxious.

One way energy vampires use rage is by taking in large amounts of emotional energy. It can be done through yelling, screaming, or even feeling angry. They then use this anger to siphon off the dynamic energy of others, which they can use to power themselves or their projects.

When someone is in a rage, it’s hard for them to think clearly and make a good decision. It can lead them to take advantage of a particular person by attacking them physically or emotionally, draining their energy.

Energy can act like a victim to stealing energy from others. They may act needy or helpless and claim they need the person’s energy and compassion to survive. Energy vampires often use emotional blackmail to get their victims to give in, claiming that if they don’t give them energy, the vampire will suffer somehow.

Energy vampires might use vortex energy to steal energy from other beings. They can do this by either sucking the life force out of their victims or using their vortex to trap and suck in energy. This stolen psychic energy is used to fuel their vampire-like abilities or add to their already large hoard of wealth.

Energy vampires can be a dangerous and destructive force, especially if they are not stopped. They can sap the life out of others to survive and thrive, leaving them weakened and vulnerable. It is essential to be aware of the damage they can cause.

Energy vampire traits can be challenging to spot, as they often appear normal and friendly. If you become involved with an energy vampire, it is vital to seek help from a trusted person who can support your efforts to break free. If you are ever in danger from an energy vampire, it is essential to remember that you are not alone. There are people who can help protect you and support your efforts to overcome this difficult situation. If you feel you’re being taken advantage of or someone is draining your energy, it may be time to set boundaries.

It’s important to understand that there is no one-size-fits-all answer. Some people might try and avoid the person altogether, while others may try and confront them or even engage their motivation. Ultimately, what works for one person might not work for another, so it’s essential to figure out what makes you feel safe and comfortable before taking action.

BioScan can be a massive help to people who have to put up with energy vampires. Healthcare providers can identify emotional problems and start working on a protocol immediately. They can help prevent long-term health issues and allows patients to get the care they need without dealing with someone draining their energy in the long run.