To understand galvanic skin response (GSR) technology, you must review the physiological properties of the biggest organ of the body – the skin.

The skin is incredibly multifaceted. It is smooth to touch and lovely on the eye, but it also assists in regulating various bodily functions.

The skin acts as the primary interface between environment and organism. Alongside other organs in the body, it manages bodily functions like sensing and perception, basal temperature, and the immune system.

Sensing & Perception – The skin is sensory. It consists of an expansive network of nerve cells that perceive and transmit environmental changes based on the actions of receptors for pain, pressure, and temperature.

Immune System – The skin acts as a protective wall separating the body from the external surroundings and dangers – chemical agents, radiation, mechanical pressure and impacts, micro-organisms, and temperature variations. With a robust immune system, the skin can heal itself.

The human body consists of around 3 million sweat glands. This density contrasts markedly throughout the body, highly concentrated on the cheeks and forehead, fingers, palms, and feet. When sweat glands are elicited, they become more functional and stress by exuding moisture through the skin. By adjusting the balance of negative and positive ions in the secreted liquid, electrical current can flow more easily, leading to detectable electrodermal response variations. Increased skin conductance = decreased skin resistance.

This variation in skin conductance is referred to as Galvanic Skin Response (GSR) tool.

How does it function?

The full degree of emotional arousal varies depending on the environment one is in – if you find something joyful, sad, threatening, scary, or even emotionally pertinent, then the ensuing difference in emotional response increases activity.

It’s worth noting that both negative (‘sad’ or ‘threatened’) and positive (‘joyful’ or ‘happy’) stimuli can lead to emotional arousal, which can, in turn, raise skin conductance.

Although excretion plays a significant role in sensory discrimination and thermoregulation, fluctuations in skin conductance can activate by an emotional stimulus: the arousal levels directly correspond to the skin conductance.

The concentration of eccrine sweat glands greatly varies throughout the body but can be found in large amounts in the foot and hand areas.

The conscious cannot control excretion and other alterations affiliated with skin conductance. They moderate through sympathetic control, which influences a certain product of human behavior and emotional and cognitive states.

What You Should Know

Given how GSR measurements function by sensing the variations in electrical activity arising from fluctuations in sweat gland activity, the electrodes placed on the skin’s surface must be responsive to these fluctuations and capable of relaying the acquired data to the recording machine.

Many contemporary GSR electrodes have a silver-chloride (Ag/AgCl) connection point that engages with the skin. Ag/AgCl electrodes are sought-after because they are robust, inexpensive, and safe for humans. Most importantly, they can accurately relay the signal resulting from the electrical(ionic) activity.

Other electrodes work with ionic gel that can enhance the reliability of the signal, or ionic gel can directly be applied to the skin’s surface to attain the same effect. The signal transmits via the electrode to the lead wire that transports the data to the GSR machine.

Various clinical GSR sensors support varying transmission mediums, and the choice of which device to acquire for your practice depends on the type of analysis you’re doing, your studies, and your patients. 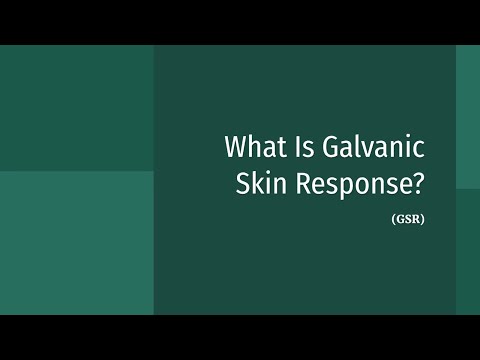 What Is Galvanic Skin Response Measuring?

Although tonic conductance is a standard reading, phasic conductance amplitudes and latency result from the body reacting to stimuli.

Phasic fluctuations can be detected when the sweat ducts of the skin fill in following a stimulus. When the sweat is absorbed or accumulated by the skin, conductance reverts to tonic levels. When there are considerable variations in GSR functionality following a stimulus, this phenomenon is called an Event-Related Skin Conductance Response (ER-SCR). Such reactions, also called GSR peaks, can offer valuable resources concerning emotional stimulation.

The intensity of emotional stimulation can be detected by gauging GSR (along with other sympathetic responses). It is noteworthy because its data is obtained directly from inside the body. Thus, the measured readings acquired are unbiased at how the body responds when exposed to certain stimuli.

Since consciousness filters the thoughts one has, it’s challenging to accurately determine what’s going on inside the body. With GSR, you can circumvent these filters and determine the body’s response with high precision.

There are many potential applications of galvanic skin response (GSR). It can be used to detect stress, anxiety, and other emotions. Additionally, GSR is a measure of your physiological response to emotional stimuli. GSR has some unique benefits that set it apart from the competition.

For one thing, it is quite reliable in measuring various emotional responses. Secondly, GSR measures changes over time, making it valuable when gauging long-term changes or trends.

What About The Sensors?

GSR sensors come in different forms – like watches, bracelets, and patch sensors. Many types of galvanic skin response sensors are available on the market, each with its capabilities. The most commonly used sensors include conductivity, capacitance, and resistance.

All these have their respective advantages and disadvantages which should be considered. The galvanic skin response test is not affected by environmental conditions.

There are many potential applications of galvanic skin response (GSR). It can be used to detect stress, anxiety, and other emotions. Additionally, GSR is a measure of your physiological response to emotional stimuli. GSR has some unique benefits that set it apart from the competition.

For one thing, it is quite reliable in measuring various emotional responses. Secondly, GSR measures changes over time, making it valuable when gauging long-term changes or trends.

The most renowned galvanic skin response sensor device in history is the lie detector examination, officially referred to as the polygraph machine. Other than gauging blood pressure, nervous, respiration rate, and heart rate, the polygraph machine gauges GSR response as questions keep going on. A trained polygrapher is qualified to study the reactions to the questions.

First off, the company polygrapher will ask a number of obvious questions design to be either false or true throughout the term, like “Do you live in this state?” to determine a baseline measurement. Additional questions are asked, and measured to contrast with the base reading to establish if the individual is telling the truth.

Other applications of the tool enables you to determine how your patient’s body is responding free of interference from conscious filters. It is an effective method for determining exactly how the body changes when exposed to certain stimuli.

Managing stress can be done in many ways, including exercising, meditation, and taking supplements. However, by understanding your galvanic skin response (GSR), you can take even more control over your stress level and have a more positive outlook on life.

By tracking your GSR, you can determine your stress level and take the necessary steps to reduce it. It will help improve your overall wellness and reduce adverse health effects. Additionally, managing stress can improve your moods, making it easier to tackle daily life challenges with a positive attitude.

GSR, along with other similar readings, falls under Biofeedback. Devices that collects biofeedback data can assist you in gaining a greater analysis of the body’s physiological happenings. The concept behind Biofeedback service is that by monitoring the responses elicited, people can train themselves to address their sympathetic responses.

The most crucial thing to note with Biofeedback technology is that it needs mental engagement and participation. You can think of biofeedback pain management as a training process instead of therapy that assists your patients to have a better understanding of their health issues, which can subsequently increase coping ability and work on their well-being.

With minimal cleanup and prep times, a system used to measure skin conductivity is non-intrusive as the procedure is as easy as placing two electrodes on the skin’s surface. The product makes taking GSR measurements efficient and comfortable for patients compared to other techniques.

You can detect and scan the skin’s ionic stress activity against a full range of psychological or physiological signals in real-time. Combine several data streams and apply digital computations with the software to detect connections between emotional or physical stimuli and skin conductance stimulation level.