Learn how to Integrate BioScan Into YOUR Practice

Have an extra 20 minutes? Click to watch a longer video
Learn how to Integrate BioScan Into YOUR Practice

What the SRT App on the BioScan System does:

The BioScan System using the SRT App (computer requirements) is an easy to use testing tool used to:

The BioScan System using the SRT App provides the patient and practitioner with a report of findings (bioscan results) indicating:

Q: What Is Stress Reduction Testing or SRT:
A: The BioScan System, using the SRT App, combines the disciplines of Acupuncture, Biofeedback, and Homeopathy. The BioScanSRT App tests the response of the client against a wide variety of digital test signatures of items which are known to potentially cause stress to the body. These "stressors" are widely varying items including foods, environmental contaminants, chemicals, nutraceuticals, toxins, emotional patterns and many more. The SRT Body 100+ Scan can be completed in less than 10 minutes. 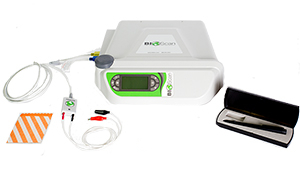 Q: What does the BioScan System do using the SRT App?
A: Substances converted to a digital format, and presented in the form of sound and light, are what allow for patient assessment testing down to the molecular level. These are what make it possible to assess thousands of substance sensitivities in mere minutes, then allow the brain and nervous system to record a new association that is positive or neutral instead of the inappropriate ones that were previously stored in memory. This breaks the link between the stimulus and response, makes symptoms unnecessary, creates balance and harmony, from dis-ease and disharmony, and allows the body to function better .

Q: Is the BioScanSRT System safe?
A: Yes
In a very simple analogy, the BioScanSRT emits sound waves during an assessment. Our device measures the patient's sensitivity which is no more harmful than listening to the radio at home or in your car.

Q: What is a BioScan test and how does it work?

A: Please watch the following video.

Q: Does insurance cover assessment and testing?
A: At this time, bioscan machine testing and assessment are provided on a cash basis and are not yet covered by insurance. However, if your insurance offers a Flexible Spending Account (FSA) you may be able to apply the services toward that account.

Q: What is the bioscan price and how much does a bio scan cost?
A: We have several hundred doctors across the country who utilize the BioScanSRT within their practice and charges will vary from clinic to clinic based on individual requirements.

Q: How long is a typical appointment?
A: The Body 100+ Scan takes less than 10 minutes. The BioScanSRT Balancing Session takes approximately 10-15 minutes.

Q: What are "stressors" and how does the BioScan SRT use stressors?
A: According to The American Medical Association (AMA), stress is the cause of 80 to 85 percent of all human illness and disease. Every week, 95 million Americans suffer some kind of stress-related symptom for which they take medication." Stress can be caused by any number of factors including but not limited to: foods, environmental contaminants, chemicals, nutraceuticals, toxins, and emotions. These specific stress inducing substances are often times what trigger the nervous systems fight or flight reactions which are expressed in a myriad of symptoms that have been scientifically proven to be associated with high levels of stress.The BioScan System software has a digital library of over 80,000 items which can be easily accessed for rapid energetic evaluation against your patient.

The BioScanSRT does not treat or cure allergies or any other types of illness or disease.

Q: Can the practitioner add products to the BioScan Virtual Library?
A: Using the optional program V/L Edit, you can add your own unlimited number of products to your software.

Q: Can you test whether products being used by the patient are effective?
A: Yes through the use of the optional accessory of the Test Plate, you can energetically test individual products that your client is currently using with the bio-scan.

Q: How can Stress Reduction Testing help everyone?
A: Because Stress could potentially affect everyone.  If you are looking into a BioScan machine for sale, please contact us!